The 2019 Annual Northern Ontario Country Music Awards Weekend was held on the Weekend of Friday November 1st, to Sunday November 3rd at the Quattro Hotel & Conference Centre  in Sault Ste. Marie, Ont.  We hosted people from all over Northern Ontario and beyond.  We had a near sell out crowd for the Awards Show on Saturday evening, with approximately 450 people in attendance.

The weekend  kicked off with a "Great Northern Opry Show and Dance" on Friday November 1, featuring the Don Gibbings Band from North Bay and friends.

Two events were held on Saturday evening, Nov 2, running back to back.

The seven Inductees into The Great Northern Opry this year were:

The 2019 Northern Ontario Country Music Hall of Fame Inductees are:

The second show of Saturday evening was another "Great Northern Opry Show and Dance", featuring Larry Cote and ACR from Sault Ste. Marie, Ontario with special guests running from 10 pm until 1 am.

Our MC for the weekend was Allan Mooney.

To get news as it is released, please Sign up to be a member of the NOCMA and you will receive occasional email newsletters containing information about upcoming events.  Also if you are on Facebook, visit and like our page. 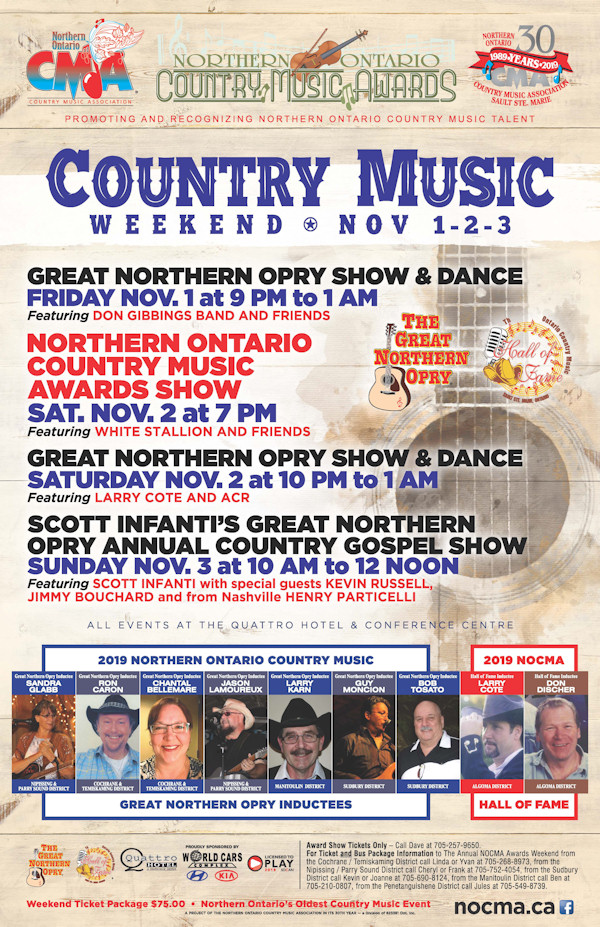