The 2017 Annual Northern Ontario Country Music Awards Weekend is being held on the Weekend of Friday November 3rd, to Sunday November 5th at the Quattro Hotel & Conference Centre  in Sault Ste. Marie, Ont.  We will host people from all over Northern Ontario and beyond.

All weekend events are to be held at the Quattro Hotel and Conference Centre on Great Northern Rd.

The weekend will kick off with a "Great Northern Opry Show and Dance" on Friday November 3, beginning at 9 pm, featuring Back in Tyme from North Bay, along with special guests.  Also scheduled to play during the evening will be special guest Harold MacIntyre, showcasing the music of award winning musician Larry Coad from Espanola.

Two events are being held on Saturday evening, Nov 4, running back to back.

The nine Inductees into The Great Northern Opry this year are:

The 2017 Northern Ontario Country Music Hall of Fame Inductee will be Eugene Manitowabi from Manitoulin Island.

The second show of Saturday evening will be another "Great Northern Opry Show and Dance", featuring Yvan Nadeau and The Bandidos from Timmins, Ontario with special guests.  The show is scheduled to begin at 9:30 pm.

The weekend ticket package is available for $70 by calling Dave @ 705-257-9650.  We also have bus tours leaving from various locations in Northern Ontario:

Visit our photo and video galleries to see pictures from previous Weekend events. 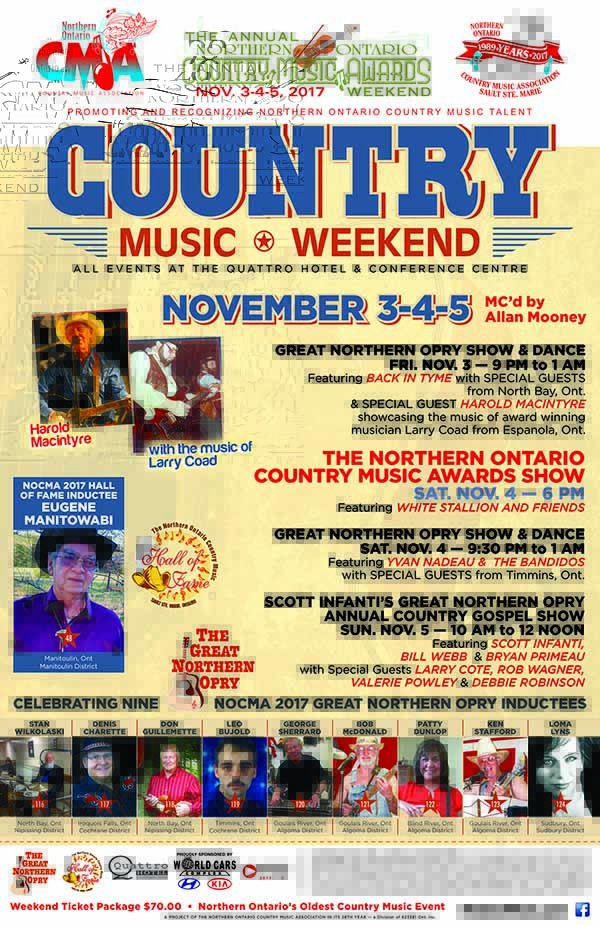