The weekend kicked off with a "Great Northern Opry Show and Dance" on Friday November 4, featuring Yvan Nadeau & The Bandidos from Timmins Ontario.  The Bandidos had a number of guests come up and join them on stage over the evening.

A special award was handed out to young Briana Nadeau during the show for her singing and work during Journée Internationale de la Femme Francophone (International Francophone Women's Day).  Brianna came up on stage to receive her award and to sing a couple of songs with her father, Yvan Nadeau. See photos from this show

Two events were held on Saturday evening, Nov 5, running back to back.

The nine Inductees into The Great Northern Opry this year were:

Other awards handed out during the evening included:

See Photos from the Awards Ceremony

The second show of Saturday evening was another "Great Northern Opry Show and Dance", featuring Back in Tyme from North Bay, Ontario with special guests.  The dance floor was overflowing for most of the night as many people took advantage of the extra hour available due to the time change.  See Photos from the show

The weekend wound up with "Scott Infanti's Great Northern Opry Annual Country Gospel Show" on Sunday morning, from 10:00 am until Noon.  This show featured Lise White and George Pinder.  See Photos from the show

Visit our photo and video galleries from the 2015 Weekend events. 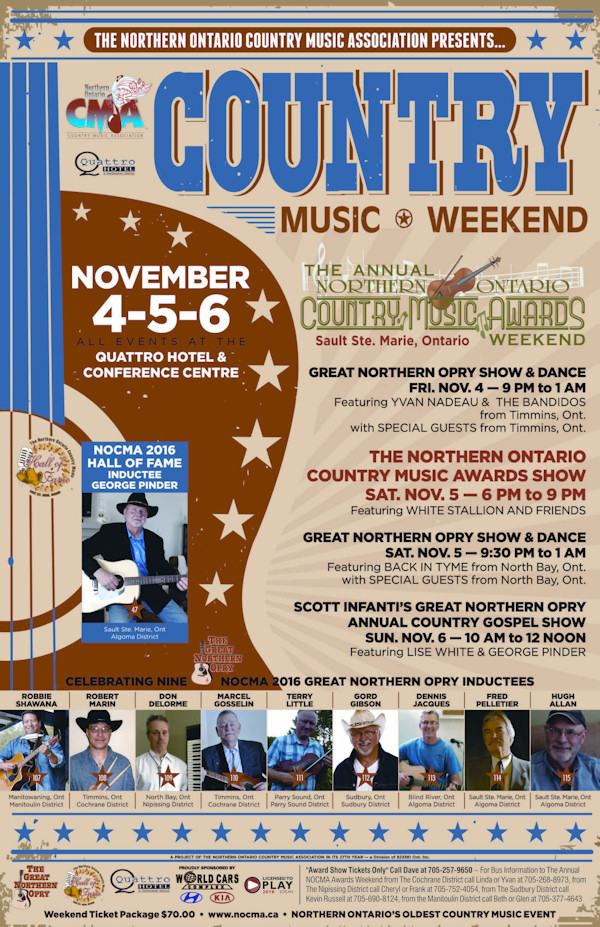