The weekend kicked off with a "Great Northern Opry Show and Dance" on Friday November 6, from 9:00 pm to 1:00 am.  This show featured Back in Tyme from North Bay, with Special Guests.

Two events were held on Saturday evening, Nov 7, running back to back.  The first was "The Northern Ontario Country Music Awards Show" from 6:30 to approximately 10 pm.  Afterwards, until 1:00 am attendees enjoyed the weekend's second "Great Northern Opry Show and Dance" featuring The Bandidos from Timmins and guests.

The Awards show on Saturday evening was sold out and featured music by White Stallion and Friends from Sault Ste. Marie.  The Master of Ceremonies for the event was Glen McDougall and Scott Infanti.    Inductees into The Great Northern Opry this year were:

The weekend will wound up with the "Great Northern Opry Country Gospel Show" on Sunday morning, from 10:00 am until Noon.  This show featured NOCMA recording artist Scott Infanti, along with Bill Webb and a number of other friends.

Visit our photo and video galleries from the 2015 Weekend events. 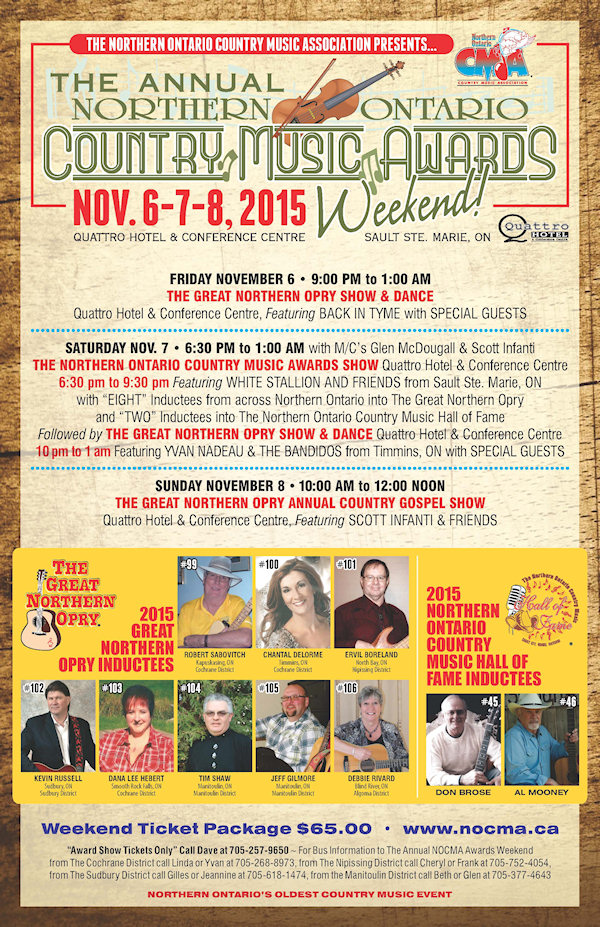